(Photo courtesy of ZeroFucksCoin.com – you can buy it there! it is not a joke)

There’s Bitcoin and then there’s shitcoin

What is a shitcoin?

Some definitions I found on the Internet:

Another definition would be that of Investopedia.

Since there is no clear standard definition, I would offer this:

“A shitcoin is a crypto asset that does a poor job of achieving its stated purpose.”

What is Bitcoin Maximalism?

In 2014, Ethereum founder Vitalik Buterin popularized the term as:

“The idea that a competing multi-cryptocurrency environment is undesirable, that it is wrong to launch ‘yet another currency’ and that it is fair and inevitable that the Bitcoin currency will take a monopoly position in the crypto scene. It is one stance that building something in Bitcoin is the only correct way to do things, and that doing anything else is unethical. “

I consider myself a Bitcoin monetary maximalist. I don’t see any other options on the market that compare to the solid monetary properties of Bitcoin. However, I also believe that not all assets must necessarily have all the properties that Bitcoin offers; there is room to make other risk / reward tradeoffs to achieve different functionality at the expense of weaker security.

Bitcoin is hard money; other tokens are not. Many don’t even try to be money. In my opinion, Bitcoin supporters need not be more offended by INX than BNB or LEO. I certainly understand the defensive attitude towards competing cryptocurrencies, but attacking digital assets that aren’t trying to be money or outright scams smacks of insecurity.

Shitcoins are everywhere. I suspect that I have more experience than most Bitcoin developers when it comes to other protocols, having built infrastructure on top of quite a few networks during the years that I worked at BitGo. I am well versed in Ethereum cheats.

Many shitcoins are scams, although not all; I guess you could also label me “minimalist shitcoin”. I have no qualms about using a shitcoin to achieve a specific purpose that could not otherwise be achieved with Bitcoin.

The past week has surely proven to be a shit storm:

Many people were motivated by the terms of INX’s IPO and considered it an ICO, however it was the ICOs that took most of its attributes from traditional IPOs!

A problem at stake, especially on social media, is that few people are going to invest time in RTFM. In this case we are talking about a 163 page prospectus. This results in the spread of a ton of ignorant shots.

Another issue is likely due to the broader audience the INX IPO is reaching. I suspect that most people in crypto have never participated in an IPO or read a prospectus before.

Why do I find regulated STOs interesting? One of the main differences is that with an IPO, investors have a clear contract that is legally enforceable. You have real rights, not just an empty promise in a whitepaper. The offering is overseen by a regulator authorized by the US government with the sole purpose of protecting investors from scams and unnecessary risks. I believe that these protections have value; History has shown us that ICOs offer no rights to investors and due to a lack of oversight and accountability they are more likely to be scams. Note that I am not claiming that all crypto token offerings should be regulated, only that it is good that issuers have the option to go this route. 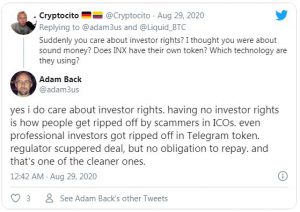 Why have I continued to advise this project for several years even though the token is launching on Ethereum? While I certainly would have preferred to launch it on a different network, the decision was already blocked for pragmatic regulatory reasons when I joined. Although I was skeptical and still believe that Ethereum is a suboptimal option from a technical point of view, I have come to see that the desired properties for the INX token make it platform independent, similar to Tether. 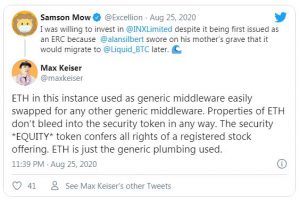 So that you have a simpler idea: almost all shitcoins (they are thousands and thousands) have been created based on a false idea “that we are going to create a better currency than Bitcoin”. But this is like copying being God … nobody succeeds :).

But yes, there are some shitcoins that at first have not been totally shitcoins. They have been created in order to TEST some new things in cryptocurrency protocols, not to make it direct in the Bitcoin code, so as not to spoil it with things that can be bad. Examples: Litecoin (LTC) and Monero (XMR) and a few more. These are not bad currencies in themselves (like thousands), they have been created more to protect the father of Bitcoin from problems in the development of these functionalities. Only then, some smart people have decided that they can get some money by putting these coins on the market and presenting them as alternatives … and many fall into this trap.

Bitcoin is the currency of the enemies.

I hope that I have given you the idea why NO SHITCOINS! I don’t want to get dirty talking about this shit anymore. If you want to see examples and explanations of many shitcoins, here is a page dedicated to this: SHITCOIN.COM

Other resources in regards of shitcoins:

derGigi explanation thread – Why shitcoins are a waste of your time

Simply Bitcoin podcast – every day a daily fail of a shitcoin

The Great Plague of Shitcoinery